Jez Nelson presents highlights from the 2011 GIO Festival in Glasgow. Run by the Glasgow Improvisers Orchestra for the last four years, GIO Festival presents improvisation in a variety of sometimes unusual settings. Among the featured artists this year are avant-garde Japanese pianist Satoko Fujii, a pop-influenced quartet that includes festival director and saxophonist Raymond MacDonald and Bill Wells, and the GIO themselves, performing a newly commissioned work.

Full programme details. It will be available to listen to online for a week after the broadcast.

There’s a long but very interesting interview with Raymond Macdonald online at http://www.mefeedia.com/watch/32348459. (The podcast interview is in French but the interview itself is in English).

One of the Scotland’s main events for anyone interested in improvised avant-garde music takes place this weekend: the Glasgow Improvisers Orchestra‘s GIO Festival. 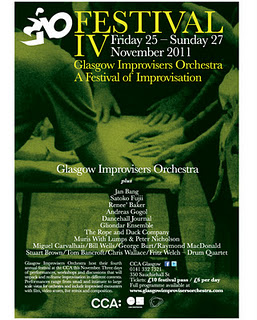 GIO Festival IV is being held at the CCA, mainly on Friday and Saturday, and the full programme can be found on the GIO blog.

On Saturday 26th, things kick off at 3pm with a workshop performance led by AACM member Renee Baker, and go on to include a drum quartet, experimental films with live accompaniment, a series of duets, a collaboration between the GIO and a classical wind quintet, Texan percussionist Fritz Welch, and live remixing of a GIO performance by Norway’s Jan Bang.

Day tickets for Friday and Saturday cost £6, or you can get a two-day ticket for £10.

I hadn’t heard of Renee Baker before, but I rather like this: 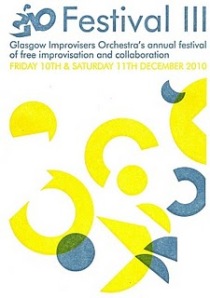 I made it along to hear a couple of the Saturday evening performances at this year’s Glasgow Improvisers Orchestra Festival (previewed in the Herald). I don’t listen to much free improvisation, so I’m never quite sure what I should be listening for, or what distinguishes a good improv set from a poor one. But approaching it with open ears, here’s what I made of it.

First up was a set of three small group performances, billed as being by three duos, but on the night performed by two duos and a quartet.

The first pairing was saxophonist John Butcher and percussionist Fritz Welch. It opened with Welch playing musical saw, and Butcher producing sounds from his soprano a bit like static on a badly-tuned radio. As their set progressed, Butcher continued to explore the outer limits of the sounds you can get from a saxophone, often at a barely-audible volume, while Welch accompanied him on a deconstructed drum set, using it to produce colouristic sounds rather than to lay down a beat.

Next up was a quartet of two double basses (Dominic Lash and Armin Sturm), flute (Emma Roche) and voice (Maggie Nicols). This was a bit more conventional. Quite a lot of the time, one bass player would be playing pizzicato, and the other arco, with singer and flautist responding to what they were playing and to one another.

The third small group set was a guitar duo of George Burt and John Russell, Burt playing acoustic and Russell a lightly-amplified electric guitar. Much of their set was devoted to an exploration of the different sounds which could be produced by strumming or plucking the guitar at different points: at the normal place, high up the neck, below the bridge or between the left hand and the top of the neck. They threw out a lot of good ideas, but I felt they never really took the time to develop any of them properly.

After an interval of about an hour, Edge, a trio made up of Ken Hyder, Raymond Macdonald and Maggie Nicols came on to play an intense and inventive forty-five minute set, which mixed elements of free jazz and Scottish folk music. It started off with a bleak aural soundscape out of which ghostly whisps of melody condensed only to evaporate again, before various songs – including Ae Fond Kiss, Ye Banks and Braes, McCrimmon’s Lament and Gaelic mouth music – emerged then eventually disappeared back into the sonic mist. Hyder sang a lot as well as playing drums, and Maggie Nicol played piano for part of the set as well as singing. The piece ended with what was quite possibly the first ever free jazz version of a Harry Lauder song: a Nicols and Hyder duet on Keep Right on to the End of the Road which gave the song an air of grim perseverance rather than optimistic anticipation. It gave the impression that whatever was at the end of the road wasn’t necessarily pleasant, but there was no alternative to trudging on towards it. The trio’s set wasn’t an easy listen, but was engrossing from start to finish. I hope they continue to work together: I’d definitely like to hear them again.

The evening ended with a performance by the full Glasgow Improvisers Orchestra and their guests, but because it was getting late and some of the pavements out my way were still dangerously icy I decided not to stay for it.

I generally believe there’s far too much marketing in the modern world, much of it dedicated to persuading you to acquire something which is at best unnecessary and at worst harmful (like a Tory government). This year’s Glasgow Jazz Festival seems to be going the other way, with very little publicity about the events. Since my last post on the Festival, there’s still been no formal press launch of the programme, and no sign of a published brochure. More information is now up on the Festival web site, but it’s probably still worth browsing the individual venues’ web sites to find out exactly what’s on when.

GIJF concerts which have caught my eye since I last previewed the Festival are:

The programme’s shaping up nicely. I just wished it was being a bit more heavily promoted.
Glasgow International Jazz Festival
Tron Theatre web site.
Glasgow Concert Halls web site (for the Recital Room and City Halls gigs mentioned above, plus info about what’s on at the Concert Hall and Strathclyde Suite).

There’s an interview with Raymond Macdonald in the Scotsman about his performance at the Jazz Bar in Edinburgh tonight with leading Japanese free improvisers Sakoto Fujii (piano) and Natsuki Tamura (trumpet) and about the Scottish free music scene generally. Unfortunately by the time I get this posted, the gig will already have started, but for the record the line-up is completed by Neil Davidson (guitar), George Lyle (bass) and Tom Bancroft (drums).

The Herald, on the other hand, interviews another Tom Bancroft collaborator, Billy Jenkins, about his new album I am a Man from Lewisham. I always thought he was from Bromley, but maybe that just shows how vague my knowledge of the geography of the barbarous wastes south of Watford is.